Ms. Thompson has represented Federal agencies before several administrative bodies, including the Armed Services Board of Contract Appeals, the Merit Systems Protection Board, the Equal Employment Opportunity Commission, the Federal Labor Relations Authority, and the Office of Special Counsel. She also has assisted and appeared with Department of Justice attorneys in Federal district and appellate court litigation.

Prior to her arrival at the Department of Labor, Ms. Hantz led a team of 72 evaluators in the Office of the Inspector General, Department of Defense (DOD OIG) since April 1, 2019. From September 14, 2008 to March 31, 2019, Ms. Hantz led 39 expert auditors in the DoD OIG with a large mission to provide policy and oversight evaluations throughout the Defense audit community including 22 audit organizations with over 7,000 auditors, non-Federal auditors performing Single Audits for the Department, and contracting officials implementing contract audit recommendations. Ms. Hantz oversaw the performance of external quality control reviews of Defense audit organizations quality control systems. She also provided oversight of and conducted quality control reviews of single audits of not-for-profit organizations, colleges, universities, state and local governments. She oversaw the completion of Hotlines and evaluations of contracting officials’ actions on Defense Contract Audit Agency audit recommendations.

Ms. Hantz is a native of Washington, DC. She earned her Bachelor of Science Degree in Business Administration from Howard University, and a Master of Science in Administration from Central Michigan University. She is also a graduate of Harvard University’s “Leadership for the 21st Century” program and the Federal Executive Institute’s “Leadership for a Democratic Society” program. She attended Syracuse University Maxwell School as a National Security Management Fellow, and is a Certified Public Accountant licensed in Maryland.

Ray B. Armada was appointed as Deputy Assistant Inspector General for Audit, Office of Inspector General, U.S. Department of Labor, on February 17, 2019. He is responsible for providing overall leadership to the Office of Audit, with a focus on performance audits. Prior to his appointment, Mr. Armada served as the Audit Director in DOL OIG’s San Francisco office.

Mr. Armada received recognition throughout his DOL OIG career, including numerous Council of the Inspectors General Integrity and Efficiency Awards, Secretary’s Exceptional Achievement Awards, OIG Excellence and Special Achievement Awards, Office of Audit “Big A” Awards and the Office of Audit Director of the Year Award. He is a native of San Francisco, California and received his Bachelor’s Degree in Business Administration from California State University,Hayward.

Michael C. Mikulka, a member of the Senior Executive Service (SES), was sworn in as the Assistant Inspector General for Investigations, Office of Inspector General, U.S. Department of Labor, on April 25, 2021, and is responsible for directing the OIG’s nationwide investigative program and providing overall leadership to the Office of Investigations-Labor Racketeering and Fraud. Prior to joining the OIG’s executive team, Mr. Mikulka served as the Special Agent-in-Charge of the OIG’s New York Region. In that capacity Mr. Mikulka oversaw the investigative work of eight offices that cover the eight northeastern states and the Commonwealth of Puerto Rico. Mr. Mikulka has over 20 years of Federal law enforcement experience.

Mr. Mikulka began his federal career with the U.S. Customs Service as a U.S. Customs Inspector in 1997. In 2002, Mr. Mikulka transferred to the U.S. Postal Inspection Service and was appointed a U.S. Postal Inspector. As a U.S. Postal Inspector, Mr. Mikulka investigated external crimes in Brooklyn, NY. In 2005, Mr. Mikulka transferred to the U.S. Department of Labor, Office of Inspector General and was assigned as a Special Agent in the Newark, NJ Field Office. For 8 years, Mr. Mikulka conducted large-scale investigations focused on labor racketeering in the construction industry and fraud involving the Department’s foreign labor certification programs. During that time, he worked extensively with various federal, state and local agencies on high profile prosecutions in the District of New Jersey and the Southern District of New York.

Mr. Mikulka is a native of New York City. He earned his Bachelor of Arts Degree in Philosophy from St. John’s University. He is also a graduate of the Federal Executive Institute’s “Leadership for a Democratic Society” program

Tara A. Porter was sworn in as the Assistant Inspector General, Office of Management and Policy (OMAP), in the U.S. Department of Labor’s Office of Inspector General (DOL OIG) in September 2021. In this capacity, she is responsible for the oversight of the OIG’s budget, human resources, personnel security, training, procurement, and space and administrative functions.

Prior to joining DOL OIG, Ms. Porter was the Deputy Assistant Inspector General for Management and Administration at the U.S. Department of Veterans Affairs (VA) OIG. While at VA OIG she was responsible for operational planning; internal control oversight; training coordination; budgetary formulation and execution; space planning and facilities management; and human resources management.

Ms. Porter has also served as the Assistant Inspector General for Management and Administration at the U.S. Department of Energy (DOE) OIG. In that role, she was responsible for budget formulation and execution, strategic planning, performance management, IT resource allocation, web development, human capital management, policy development, contract management, capital investment, facilities management, and security oversight. Prior to DOE OIG, she worked for the Recovery Accountability and Transparency Board, which was responsible for the oversight of the $787 billion American Recovery and Reinvestment Act. During her tenure with the Recovery Board, Ms. Porter was instrumental in coordinating cross-cutting issues that impacted the entire Inspector General community.

Ms. Porter’s 30-year Federal career spans multiple agencies. In addition, she also served in the Air Force Reserves at Hill Air Force Base in Utah and the Air National Guard at Joint Base Andrews in the Washington, DC area. 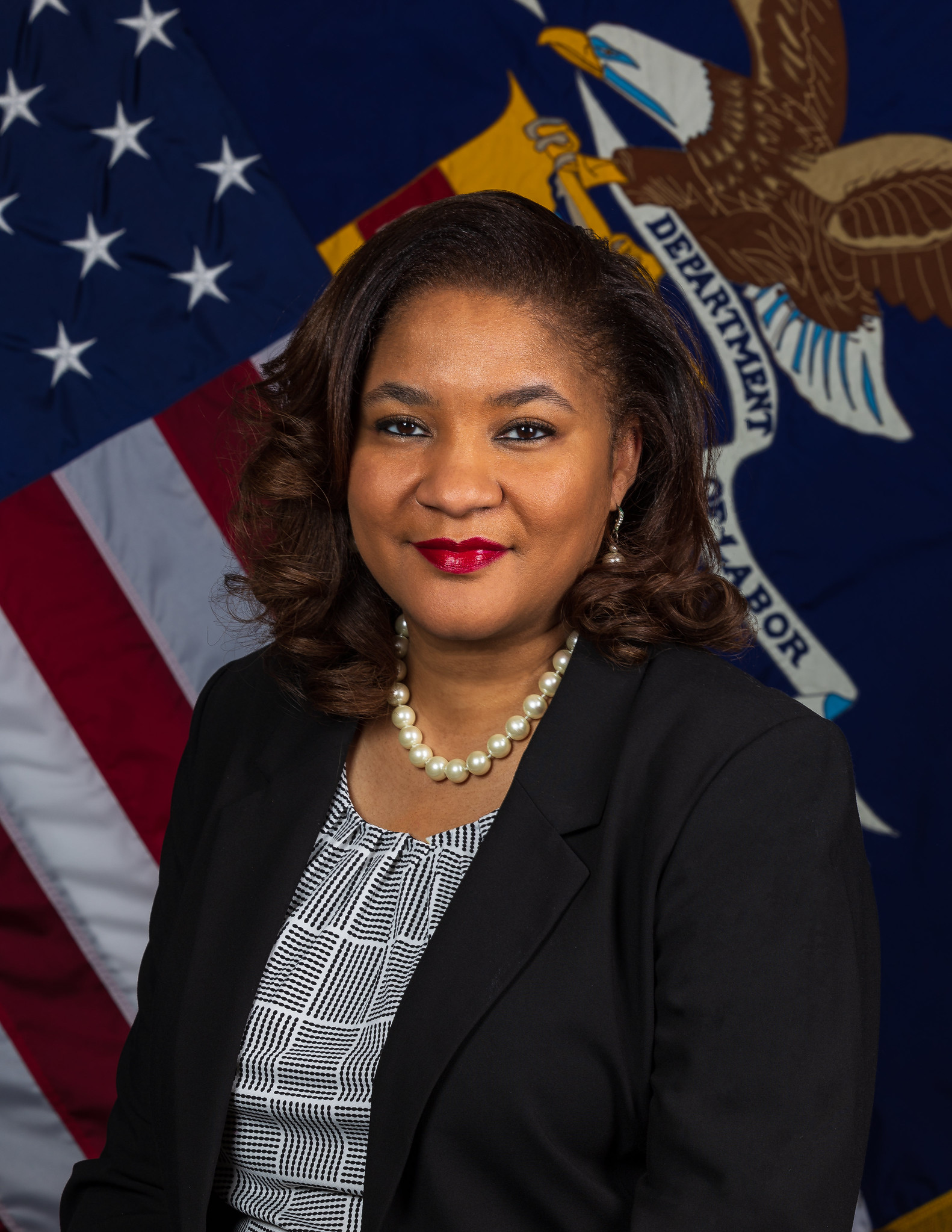 Claudette L. Fogg-Castillo, a member of the Senior Executive Service (SES), was sworn in as the Deputy Assistant Inspector General for Management and Policy, Office of Inspector General, U.S. Department of Labor (DOL), in August 2021 and is responsible for providing overall leadership to the Office of Management and Policy, overseeing the full range of OIG business functions nationwide to include human resources, budget, procurement and administrative services.

Prior to joining the OIG’s executive team, Ms. Fogg-Castillo served as the Chief Administrative Officer and Director of Administrative Services within the Office of Defense Nuclear Nonproliferation, National Nuclear Security Administration in the Department of Energy, where she was responsible for agency-wide business services, policy development and strategic workforce planning that included program oversight for human capital and workforce development, procurement, facilities and logistics, personnel security, travel and training, records and FOIA management and all administrative operations.

Ms. Fogg-Castillo began her career as an administrative specialist in the U.S. Army in 1993 working her way up to a senior noncommissioned officer and holding various positions and military assignments world-wide in the areas of administrative management and human resource operations, as well as serving as a human resources specialist, Army Instructor and Course Director during her tenure.

In 2004, she began her federal career and has held positions of increasing responsibility as an Administrative Officer within the Department of Homeland Security, Immigration and Customs Enforcement, overseeing the full spectrum of the Agency’s mission support functions as well as Deputy Director and Chief Administrative Officer within the Department of Defense, Office of the Judge Advocate General overseeing the Agency’s day-to-day business functions and administrative operations.

Ms. Fogg-Castillo has received a number of military and civilian awards throughout her career, including Meritorious Service Medals, Army Achievement and Commendation Medals, as well as Commander’s Awards for Civilian Service. She holds a Bachelor’s Degree in Business Administration from the University of Maryland, and is a certified Program Manager (PM) and Contracting Officer Representative (COR), and is also a graduate of the Federal Executive Institute.

Thomas D. Williams is member of the Senior Executive Service with a distinguished career in the federal government that spans nearly 40 years. His areas of expertise include developing, linking, and implementing strategic; financial; human capital; operational; technology; and administrative policies and plans for federal research, engineering, and regulatory programs. Mr. Williams was appointed as the Chief Technology Officer for the Office of Inspector General in 2021.

In this role, he leads and oversees the planning, design, and implementation of long and short-term goals and strategies for information technology initiatives in the areas of information technology infrastructure, networking, database management, data analytics, and cyber security. Prior to his current position, in 2015, Mr. Williams was appointed as Assistant Inspector General for Management and Policy at the DOL OIG where he led the overall planning, direction and management of all business and administrative functions for the agency. This includes independently providing the full range of human resources, information technology, budget, and procurement services to the OIG nationwide.

From 2011 to 2015, Mr. Williams was the Assistant Administrator for Resource, Technology, and Management at the U.S. Energy Information Administration, the nation's premier source of energy information to promote sound policymaking, efficient markets, and public understanding of energy and its interaction with the economy and the environment.

From 2007 to 2011, Mr. Williams served as an Associate Director for Management at the Food and Drug Administration where he oversaw business, administrative, and technology management associated with the agency mission of protecting the U.S. food supply.

In 2002, Mr. Williams became the first Executive Officer for the newly created National Center on Minority Health and Health Disparities at the National Institutes of Health (NIH), where he directed business operations for national research programs to improve minority health and reduce health disparities.

Mr. Williams also served as the Director of Budget and Strategic Planning at the National Environmental Satellite and Data Information Service at the National Oceanic and Atmospheric Administration. There, he oversaw strategic planning and financial management for the Nation’s multi-billion dollar satellite-based environmental monitoring programs. From 1986 to 2000, Mr. Williams held numerous positions at the NIH, culminating in his appointment as the Financial Management Officer at the National Institute of Allergy and Infectious Diseases in 1996.

Mr. Williams holds a Masters of Business Administration from Loyola College where he graduated with Beta Gamma Sigma honors. In 2013, Federal News Radio recognized Mr. Williams as one of the Top 5 Leaders in the Federal Service. In 2015, the President of the United States honored Mr. Williams with the Presidential Rank Award for his years of distinguished service.

Jessica Southwell, a member of the Senior Executive Service, was sworn in as Chief Performance and Risk Management Officer, U.S. Department of Labor (DOL), Office of the Inspector General (OIG), in May 2016. She is responsible for leading organizational performance and risk management activities across the OIG, working closely with senior leadership to enhance organizational performance and manage risks to the OIG mission. Prior to joining DOL OIG, Ms. Southwell served at the National Aeronautics and Space Administration as Director of Agency Councils under the Office of the Administrator, and as Branch Chief of Strategic Planning and Performance Management under the Office of the Chief Financial Officer.

Ms. Southwell also served at the Department of Homeland Security (DHS) as Branch Chief of Strategy and Performance Management, Verification Division, U.S. Citizenship and Immigration Services, and as a risk expert within the National Protection and Programs Directorate where she was responsible for facilitating DHS’s implementation of the Chemical Facility Anti-Terrorism Standards regulation. Prior to DHS, Mr. Southwell served at the Department of Health and Human Services, where she managed an array of all-hazard preparedness programs both in the U.S. and abroad.

Ms. Southwell earned a Bachelor’s Degree in International Relations from the American University, and a Master’s Degree in Public Administration from the George Washington University. She is a graduate of the Federal Executive Institute.