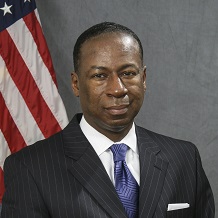 Larry D. Turner was sworn in as the Deputy Inspector General of the U.S. Department of Labor and as a member of the Senior Executive Service on September 8, 2014. And since June 22, 2020, he has served as Acting Inspector General. As Acting Inspector General, Mr. Turner is responsible for overseeing the administration of a nationwide, independent program of audits and investigations, involving Department of Labor programs and operations, such as Job Corps, employee benefit plans, and by combatting the influence of organized crime and labor racketeering corruption in the workplace.

Mr. Turner holds a BS Degree in Business from Morgan State University, an MBA in Business Management from Golden Gate University, and an MS Degree in Resource Management from the Industrial College of the Armed Forces (ICAF). He is a graduate of the Command and General Staff College; the Harvard University Senior Executive Fellow Program; the Defense Leadership and Management Program (DLAMP); and the Federal Executive Institute. Mr. Turner holds a Certificate in Financial Planning from Georgetown University.