As the federal agency with primary oversight of the U.S. Department of Labor (DOL), the Office of Inspector General (OIG) remains committed to meeting the challenges created by the coronavirus (COVID-19) pandemic and assisting DOL and Congress in improving the efficiency and integrity of the Unemployment Insurance (UI) program. Strengthening the UI program to prevent improper payments, including fraud, and to detect and recover improper payments that have been made, is key to ensuring unemployed workers expeditiously receive much needed benefits, while safeguarding tax dollars directed toward that goal.

The UI program is a joint federal-state program that acts as an initial economic safety net when individuals lose their jobs through no fault of their own. Each state workforce agency (SWA or state):

UI benefits are generally funded by state employer taxes with administrative costs funded by the federal government. Extensions and expansions of coverage and benefits, such as those provided by the Coronavirus Aid, Relief, and Economic Security (CARES) Act and subsequent legislation, are also normally funded by the federal government. DOL’s Employment and Training Administration (ETA) is the federal agency responsible for providing program direction and oversight. The OIG conducts independent oversight of the UI program through audits to strengthen the integrity and efficiency of the program and criminal investigations to detect and combat large-scale fraud.

Over the years, the OIG has repeatedly reported significant concerns with DOL and SWAs’ ability to deploy program benefits expeditiously and efficiently while ensuring integrity and adequate oversight, particularly in response to national emergencies and disasters. The OIG has reiterated these concerns following the economic downturn created by the COVID-19 pandemic and the unprecedented levels of federal funding allocated to the UI program, which is currently estimated at approximately $873 billion.

In April 2020, we published our Pandemic Response Oversight Plan detailing how the OIG would conduct its oversight, with a significant focus on the UI program. We structured the work for completion in four phases. During Phase 1, we examined past audits related to the American Recovery and Reinvestment Act of 2009, and the Disaster Unemployment Assistance program, and assessed comparable lessons learned as they were applicable to the UI program. As a result, in late April 2020, we issued an Advisory Report outlining our initial concerns regarding the implementation of the UI program provisions under the CARES Act. The report summarized dozens of OIG recommendations to implement corrective action in these areas.

Since then, we have issued several other reports and alerts involving the UI program. For example, our assessment of DOL’s CARES Act implementation plan resulted in an Alert Memorandum in May 2020, describing our concerns regarding claimant self-certification in the Pandemic Unemployment Assistance (PUA) program. In our view, reliance on such self-certifications rendered the PUA program highly vulnerable to improper payments and fraud. The OIG’s alert memorandum informed recent COVID-19 legislation, which included provisions to improve SWAs’ abilities to ensure proper claimant eligibility and to mitigate fraud.

In June 2020, the OIG provided a member briefing and a statement for the record to Congress highlighting challenges DOL and SWAs face in administering and overseeing the UI program. As the OIG reported, the unprecedented infusion of federal funds into the UI program gave individuals and organized criminal groups a high-value target to exploit. That, combined with easily attainable stolen personally identifiable information and continuing UI program weaknesses identified by the OIG over the last several years, allowed criminals to defraud the system. 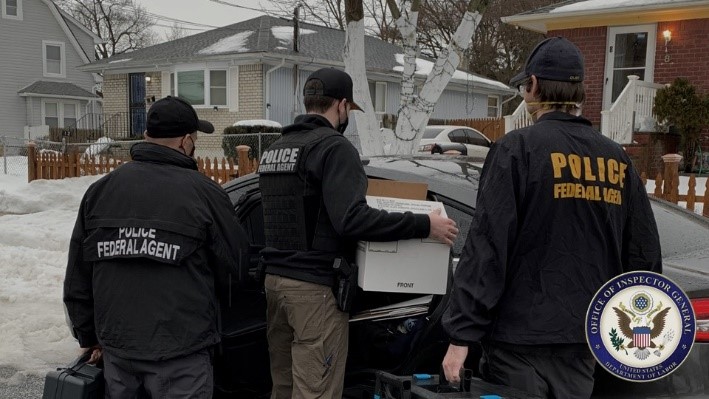 Indeed, following the passage of the CARES Act, fraud against the UI program exploded. Working with our federal and state partners, we have been able to identify billions in potential UI fraud nationwide. Since the start of the pandemic, the OIG has opened more than 17,000 complaints and investigations relating to UI benefits paid under the CARES Act and subsequent legislation. We are in the process of reviewing an additional 90,000 complaints from the National Center for Disaster Fraud. As a result of the surge in complaints, UI investigations now account for 87 percent of the OIG’s investigative case inventory, compared with 12 percent prior to the pandemic. In response to the extraordinary increase in oversight demands, the OIG hired additional criminal investigators; increased the caseload of investigators already on-board; deployed federal and contract staff to review DOL and SWAs’ efforts; and strengthened our data analytics program. In addition, we took several other actions to augment our efforts, including the following:

Since the start of the pandemic, OIG investigations have led to more than 350 indictments and 83 convictions. In one recent OIG case, U.S. v. Leelynn Danielle Chytka, in the Western District of Virginia, a defendant pleaded guilty for her role in a scheme that fraudulently stole more than $499,000 in UI benefits using the identities of individuals ineligible for UI, including a number of prisoners.

Our efforts to date have directly resulted in the identification and recovery of more than $160 million in fraud involving the UI program. We have also assisted other federal and state agencies identify and recover more than $565 million in fraudulent UI benefits. In addition, the OIG identified more than $5.4 billion of potentially fraudulent UI benefits paid to individuals with social security numbers filed in multiple states, to individuals with social security numbers of deceased persons and federal inmates, and to individuals with social security numbers used to file for UI claims with suspicious email accounts. In an Alert Memorandum issued in February 2021, the OIG notified DOL of these high-risk areas for potentially fraudulent claims and recommended DOL take corrective actions.

In addition, we recently issued a report detailing our review of DOL and SWAs’ implementation of the three key new UI programs that posed the greatest risk for fraud, waste, and abuse: Pandemic Unemployment Assistance, Pandemic Emergency Unemployment Compensation, and Federal Pandemic Unemployment Compensation. To perform our review, we selected 12 states based on a risk-assessment process that included several risk factors, including the states’ improper payment rates, fraud allegations received, average weekly UI claims, previous audit findings, as well as congressional and public interest. We also administered surveys to the states that were not included in the in-depth analysis.

Our review found that DOL and the states struggled to implement the three key CARES Act UI programs. Specifically, DOL’s guidance and oversight did not ensure states implemented the programs and paid benefits promptly; performed required and recommended improper payment detection and recovery activities; and reported accurate and complete program activities. This occurred primarily because states’ IT systems were not modernized, staffing resources were insufficient to manage the increased number of new claims, and according to state officials, guidance from DOL’s Employment and Training Administration (ETA) was untimely and unclear. In addition, many states did not perform required or recommended improper payment detection and recovery activities: 40 percent of states did not perform required detection cross-matches, 88 percent did not perform the recommended detection cross-matches, and 38 percent did not perform required recovery activities. Further, 42 percent of states did not report CARES Act UI program overpayments to ETA as required. States that did report overpayments understated the total amount reported by an estimated 89 percent.

While concerns persist within the UI program, DOL has instituted efforts to focus on program integrity when implementing the CARES Act and other pandemic-related UI programs. These efforts include putting agreements in place with states to comply with all applicable requirements to receive funds, issuing operating guidance, and providing technical assistance to SWAs individually and through webinars. DOL has included requirements for SWAs to focus on program integrity in guidance related to pandemic-related UI funds. In addition, DOL has reinforced the need for SWAs to actively partner with the OIG to address fraud in the UI program.

Further, the UI Integrity Center, established by DOL through a grant and operated by the National Association of State Workforce Agencies (NASWA), has continued to develop the Integrity Data Hub (IDH) to serve as a secure portal for SWAs to cross-match public and private sources of data, including new tools that will help prevent improper payments. DOL is working with NASWA’s Integrity Center to further enhance SWA participation in and use of NASWA’s IDH through additional guidance and regular communication with SWAs.

The OIG has made several recommendations to improve the efficiency and integrity of the UI program. Specifically, DOL needs to:

Finally, Congress should consider legislative action to allow DOL and the OIG to have direct access to UI claimant data and wage records for its oversight responsibilities. Real-time direct access to SWA UI claimant data and wage records systems would further enable the OIG to quickly identify large-scale fraud and expand its current efforts to share emerging fraud trends with state workforce partners in order to strengthen the UI program and likely prevent fraud before it occurs. In addition, the data analytics based on the direct access would further enable our auditors to identify program weakness and recommend corrective action that will improve the timeliness of UI benefit payments and the integrity of the UI program.

The OIG’s efforts to strengthen and protect the UI program continue. In addition to working with our law enforcement partners to combat fraud in the program, we will be issuing additional reports covering critical areas of concern and opportunities for program improvement. These will include reports on:

For more information about the OIG's work, please visit our Pandemic Response Portal.